The weather over the weekend was cloud covered, snowing and really windy and so I spent most of the time huddled in the house avoiding winter's onslaught. It was kind of sad, really, as I was browsing Instagram it looked like the bad weather was localized ?! with bluer skies out in the mountains.. I dunno. I haven't been to the mountains for a while now and I'm starting to wonder what it's going to take to get out there again.

This morning the sky was clear and the sun was out with no wind it was a brisk -12degC though. As I drove into downtown to drop Jen off, the beautiful orange sunrise light was just scraping the tops of the buildings. About 25 minutes later I was looking for a place to park in Bridgeland so I could get out and grab some photos.

I'd seen the view below as I drove into downtown and wanted to take a closer look at it.. of course in the half hour or so since I first drove by, the initial orange glow was gone and been replaced by a bluer sidelight, which was still pretty nice. Of course it's another photo of the Calgary tower, how could you expect anything less. I don't think I can take a picture downtown without including the tower. 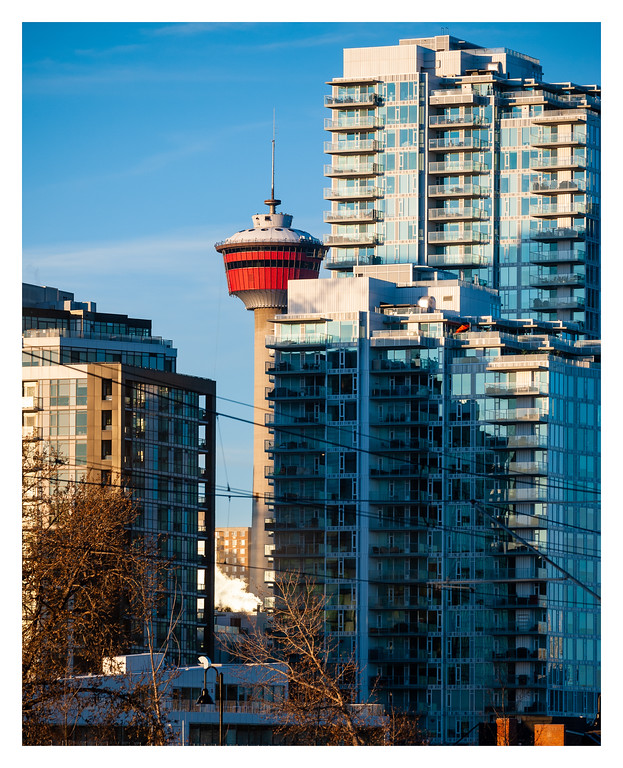 After taking some photos of my muse, I made my way towards the Bridgeland LRT station overpass.

As I approached I noticed the light coming in along the tracks through the chilled air. It was beautiful. To get a this view I had to shoot across a line of traffic and I obviously didn't want any cars to be in the frame so I kept waiting for gaps. After a while I decided to also wait and see if I could get a shot with a train in it and my new hope was that I'd get two things.. no cars and a train.  It worked! I was so happy.

Crossing the pedestrian overpass and was really smitten with the light coming out of the east. At first I started shooting just the tracks - the texture of the light and shadows really drew me in. I must have left and come back three times to just try again. I tried to get the tracks with no cars on the left side (more waiting for gaps) then I figured a train would be along soon so I waited for that.. To get a train with no cars on the left I had to employ some photoshop magic and ended up blending two images to create the one below. It happens sometimes.

As I left the train station I noticed that I had a little rock in my shoe that was poking me. I bring it up because it was at this point in my journey that I noticed it and when I noticed it, I wondered if I'd mention it in the blog and since I'm here typing up the blog, here it is, I'm mentioning it.

I didn't stop to take it out and nothing weird happened because of it, it was just a rock in my shoe.

As I walked along the path towards downtown I saw that ice was starting to form at the edges of the river. A couple days ago I'd been shooting here, near the skipping stone bridge and I didn't want to get the same stuff so I went a bit further and soon found myself under the C-Train bridge. So many bridges.

Balancing on rocks I made my way down to the rivers edge and tried to get a photo of this ice-encrusted rock by holding my camera out at arms length and snapping a photo. I couldn't look through the view finder because of how I was positioned and I couldn't use the live-view display because my day-to-day camera is quite old.

If I turn on live-view the battery will immediately die. I don't think it's a problem with the camera but with the battery itself. The current draw that live-view requires must be too much for the battery and it drains it fast. Sometimes it occurs to me that I should look for a new battery (usually when I'm wanting to use the aforementioned live-view) but for the most part this deficiency doesn't hinder my ability to make photos so I keep forgetting about it.

After crawling around the edge of the river I walked up and onto the 5th ave bridge and my interest was drawn to these curved tracks shown below. In addition to this photo, I also waited around to see if a train would come. One did, then another. I snapped photos over and over again but I haven't yet posted any of those.

After mucking around on the bridge for a bit and decided that I should head back to the car. I'd parked in a 1hr parking zone that was good until about 9:00am and I'm sure I was running out of time.

Walking along I spied the view below - that I'm sure I photographed before and of course (!) I made another photo, gotta fill up that hard drive. It's like an obsession I think.. every time I see the tower I have to take a photo.. again, I waited for a gap in traffic (which didn't take that long) after framing up my shot.

While walking through the Bridgeland back to the car, I saw this bike resting along the fence. The light and simple composition had me reaching for my camera again, which was frosty for some reason. I took a couple shots, both portrait and landscape ones to cover all the bases.. and finally got back to the car.. it was 12minutes after 9. I looked around for parking patrol cars and didn't spot any so I'm hoping I don't end up with a ticket in the mail.

Overall it was a fun morning walking around in the cold. I remembered to bring gloves this time so my fingers were still functional at the end.

If I post any other photos from this walk about, you can see them here on my smugmug site.